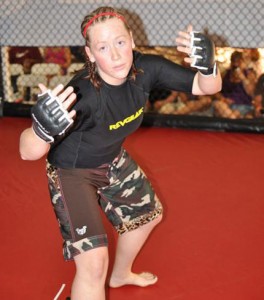 Katie “Deuce Deuce” Dihle lives in Alpena, Michigan and works for Alpena Regional Medical Center. But Katie’s true passion is Martial Arts. She has been in Martial Arts for only a short year an a half. She says she’s fortunate enough to study kickboxing, Muay Thai, Judo and other forms. MMA has become not only a hobby for Katie – it became her lifestyle. Katie says: “Training for an upcoming event is like a force that consumes me. I eat it, breath it, when I sleep I even dream about it. It's constantly on my mind”. Katie was very dedicated to her training for her last fight, Northern Bad Boys 4. Additionally to her conditioning and strength training, Katie was training with her Judo or Muay Tai trainers three times a week. And then on weekends she would do her rounds. Every round she'd get a fresh opponent who would break her down, then pick her up and do it all over again… 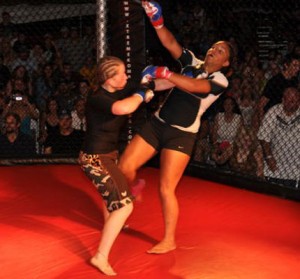 Her opponent for the Northern Bad Boys 4 fight was Anjel Howard. The fight lasted all 3 rounds and Katie won by unanimous decision. Katie says: “At times when I think about returning to the cage it does bring on certain amounts of fear, but this fear is overcome by confidence… I’m not only a fighter, like Revgear isn't just a sponsor, and MMA isn’t just any sport for me. It's who we are, where we are, and who we want to be. That's what I try to measure up to EVERYDAY. That’s how I win, whether in the cage or carrying out my life day by day”.
×