I recently had the chance to spend the afternoon with the Ruffo brothers, Carlos and Giovani.  The Ruffo boys are best known for their incredible pad work and grappling skills; which at one point had them featured as the faces of youth MMA in a national television commercial campaign when they were both less than 10 years old.  Since the boys train extremely hard and practice a variety of martial arts/combat sports, they need the proper gear and training items to be safe and efficient.  Over the years, the boys have trained with the late Shawn Tompkins, Legendary trainer Rafael Cordeiro and with current UFC contenders Mark Munoz and Jake Ellenberger just to name a few.  That means that the Ruffo Brothers need high quality gear, that won't tear apart, or take forever to get on and off.  I was able to capture a training session and to see how well the Revgear Kids Combat Series held up to the task. 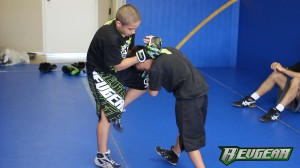 The first thing I noticed about the Kids Combat Series, was that the shorts were virtually identical to the adult Combat Series shorts.  They feature a 4 way stretch gusset, reverse Ultra-Lock hoop and loop waistband and the 5 inch slit on the inseam.  The only difference between the youth and the pro short is the color/design options.  The Ruffo's loved the shorts and mentioned how the 5 inch slit down the inseam made it easy to do high knees, flips, cartwheels and all of the other wild moves the Brothers perform during their workouts.  I am hoping that Revgear will have so much success with the Kids Combat Series designs and color schemes that they might do a limited release or special edition in Adult sizes as well;  I really like how the neon green and white pop on the black material.  Below is a video of the Ruffo Brothers using the Youth Pro Fight Short while training at the Boiler Room in Phelan, California. 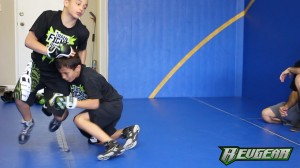 The boys were also using the Kids Combat Series Deluxe MMA Glove.  I really like this glove because of the added protection on the knuckles and the fingers.  This feature known as a 1 inch high technology padded knuckle really makes a difference in both protecting the child's hand while punching, but it also helps limit the potential for cuts and scrapes while training.  The same features is on the adult version of the Revgear adult MMA Glove, which I have personally seen UFC contender Fabricio Werdum use leading up to his famous victory over Fedor Emilianenko.  Werdum was able to practice ground and pound and full out sparring without breaking his hands/knuckles or causing cuts to his training partner.  I was pleased to see that Revgear put the same though and quality design into their Kids Combat Series.  Their Kids Combat Series Deluxe MMA Glove also features a great Ultra-Lock hook and loop closure, which makes them easy to adjust and to get on and off.  That is an important feature for kids to be able to glove up on their own, without spending extended amounts of practice time doing so.  This time saving feature is a favorite of the younger Ruffo Brother Giovani, as he mentions in the video below of the Brother's training.

Lastly, I was able to watch the Ruffo Brother's train with the Kids Combat Series Boxing Gloves.  As to be expected from Revgear, once again their Kids Combat Series Boxing Glove was made of durable synthetic leather, designed specifically to fit children's hands, are filled with ram-force technology padding, have an easy to use ultra-lock hoop and loop closure system and even features a special grip bar inside the glove to help the child make a correct fist.  That feature is discussed by Giovani Ruffo in the video below after he is shown using the Gloves during his workout.  The amount of technique shown during the pad work was truly amazing to see in person.  The Brother's were incredible quick, had great foot work and were completing boxing combination that most pro's can't even do.  Without 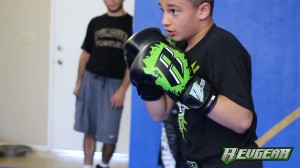 high quality gear, training at such a high level would not be as easy in my opinion.  Finding products that are designed to fit children, yet are made with the same care and thought as the adult and pro series gear is extremely beneficial to the success of any aspiring young Martial Artist, Mixed Martial Artist, Wrestler, Grappler or combat sport participant.