Revgear-sponsored Mark Bocek is set to return to the ring at UFC 129, April 30th, at the Rogers Center in Toronto, Ontario.  He will face MMA specialist and former WEC Lightweight Champion Ben Henderson.  Bocek is fresh off his first round submission of Dustin Hazelett this past December.  In the middle of the first round Bocek wrapped his leg around Hazelett’s head and hung on, submitting him with a triangle choke, (which won him ‘submission of the night’ honors and some extra cash).  Henderson (12-2) will certainly have his hands full with the grappling and takedown expert in Bocek. 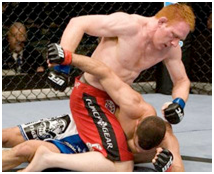 Canadian-born Bocek (9-3) holds a black belt in both Jiu-Jitsu and Kempo, has trained with both Renzo and Rickson Gracie and is known for his vicious take-downs and grappling ability.  Bocek has been fighting in the UFC since 2004, when he first caught the eye of Dana White and Lorenzo Fertitta when Bocek was training the two.  Since entering the UFC Bocek has been dominant in his weight class. Prior to his December victory Bocek was on a tear – defeating three opponents in the ring consecutively, only stopped by a hotly contested decision loss to Jim Miller back in March of 2010 at UFC 111.  Bocek would love a defeat of Henderson which would increase his chances at a title shot. UFC 129 is expected to feature Champion Georges St. Pierre and number one contender Jake Shields. There is also rumors Randy Couture and Lyoto Machida could face each other in the co-main event of the evening.