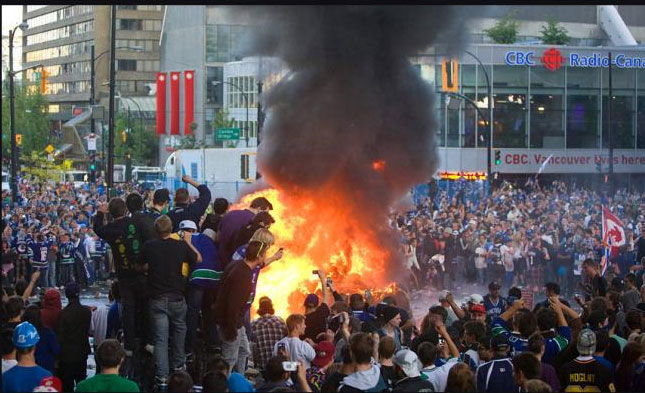 Is There a Double Standard for MMA?

There is so much talk about from sports pundits about how MMA is a so-called "blood Sport," and its fans are like rabid dogs just out for blood. But last week as UFC 131 came to Vancouver and went - PEACEFULLY- Vancouver then experienced some of its worst sports related riots ever.

Angry, drunken revelers ran wild Wednesday night after the Vancouver Canucks' 4-0 loss to Boston in Game 7 of the Stanley Cup Finals, setting cars and garbage cans ablaze, smashing windows, showering giant TV screens with beer bottles and dancing atop overturned vehicles. While, in contrast, MMA crowds have never spilled into the streets after their favorite fighter looses. So is Hockey a blood sport?

And Hockey is not the only innocent sport. Seemingly after every time the Lakers win a championship its fans turn downtown LA into a battle ground. And just a few months ago - a Dodger fan was beaten almost to death by fans outside the stadium. Doesn't this make Baseball and Basketball a blood sport?

Another question that begs asking is how much of a sports reputation as bloody is a reflection of the the actions of its fans? Does people rioting in the street reflect back on the team/sport they represent?

There seems to be a misconception that just because you can get hurt in MMA - that the sport must be violent. There is also seemingly a double standard for MMA events. If these riots were caused by fans from UFC 131 - do you think there would be people calling for the sport to be outlawed?

Sports fans and enthusiasts, look at other sports and then tell us, do you think there is a double standard for the UFC & MMA?