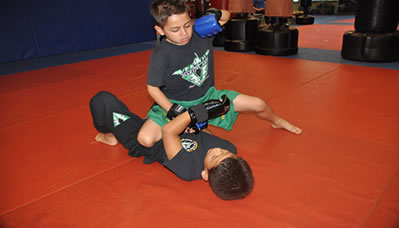 Kids In MMA, What Side Are You On?

There have been a couple news stories that have covered kid's MMA over the past five years (an NBC story). As a parent of 3, a PE teacher at The Chicago Montessori Academy, 4 time Black Belt, MMA school owner and writer who covered the UFC for 5 years for Ultimate Grappling Magazine, I still consider this a fairly controversial topic.

The acceptance of children, as young as 6 years old participating in mixed martial arts fighting warrants discussion amongst the athletic/martial arts community. Although I am not a supporter of kids in MMA, I do not want the topic to be evaluated by on-supporters of the sport who want to see it banned all together. We should be careful that those who do not support MMA for adults or understand its professionalism do not lead a crusade on this topic.

Beyond the primal factors that are most obvious, there are clinical, medical and psychological aspects to consider when inviting children into the sport of MMA. MMA is very aggressive, it requires a mature sensibility and it is not a point-based sport like most successful kid's martial arts (i.e. karate, tae kwon do, judo).

One of the most fundamental skills that make a MMA athlete a great practitioner and partner is ownership of restraint. Restraint is a very mature concept to learn when a sport's goal is to cause damage with combatives, a knock-out or submission (i.e. joint locks and chokes). MMA however can be won on points. But earning points is not the underlying strategic approach in the sport.

Then of course there is the issue of who is teaching your child. I have covered this topic a couple times. Remember that most MMA coaches are not trained or raised in the traditional martial arts.

There is a fundamental difference between fighters turn instructor and martial artists who coach the fighting sports and follow the same etiquette instilled in traditional martial arts when teaching your child.

In an interview done with a mother who was scoping out a kid's MMA program at a California school, she asked her 6 year old son Ryan if he wanted to do MMA {referring to the MMA sparring he saw of other kids}. His answer was "It's too creepy." His mother then asked him, "Is it scary?" Her son nodded yes.

This should be a normal response. However, in an effort to present both sides of this, kids are scared when they watch a lot of new things like diving, motor-cross and karate. All these activities are widely accepted as normal. Shark Tank, a MMA school in California that has a successful MMA kids program takes kids as young as 6 years old.

The coach, a former Special Forces Instructor does not believe that kids MMA is teaching violence, "that doing MMA with violence is your attitude and they are not doing it with malice or evil intent - it is a sport, it is martial arts, parents need to understand it is martial arts."

Paul Stricker, MD, who served on the US Olympic Team in 2000 and is a specialist in youth sports, says that children are taught the behavior of beating up other kids. "You have to think about how you are allowing children at 6, 7 years of age to be unleashed - so young, giving them permission to hit, kick and beat up other kids. It is not normal child development," explains Stricker.

Stricker's point is not what concerns me - in fact I do not find it well thought out; after all, boxing, tae kwon do, hapkido, kung fu can all be used to beat up someone else. We have all seen the Karate Kid movies.

All of these sports are point driven and follow a well-established, traditional structure. I do not agree with Dr. Stricker, he has forgotten that boxing, judo and tae kwon do are in the Olympics. However, MMA is a sport that is the closest thing to a street fight - children should not be exposed to the combat version of martial arts.

What do you think? Should kids be allowed to compete in MMA?