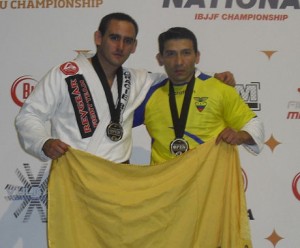 Juan Pablo Garcia, 27, is originally from Ecuador. He started training Brazilian Jiu Jitsu back in Ecuador, and after a couple of years he felt he needed more. Hi started traveling to Brazil and USA to train and to compete. Juan Pablo got his Blue Belt in BJJ with Royce Gracie in Ecuador, and then his Purple Belt with Marcio Simas in Gracie Barra in Orlando, Florida, and won the Florida State Championship right after that. Juan Pablo returned back to Ecuador, and opened his Gracie Barra school where he was teaching for 3 years. But it was never enough - Juan Pablo wanted to compete more -  so he decided to relocate to the United States. Here he got his Brown Belt under Roberto Tussa Alencar in Gracie Barra, Albuquerque, New Mexico. Currently Juan Pablo teaches Brazilian Jiu Jitsu in Gracie Barra Pasadena, Encino and Burbank in California under Prof. Alberto Crane, and competes in various BJJ Tournaments. Next year he wants to get his Black Belt, compete in all BJJ Federation tournaments, and start his MMA career.