9 Reasons Why Nick Diaz is One of the Greatest MMA Fighters of All Time! - By Gary Edwards #9.   Loyalty Nick Diaz is extremely loyal to coaches and teammates.  Nick will never fight his teammates.  In fact, the thought of it sickens him.  He considers teammates to be like his brother, and how could he ever actually go on live television and hurt his brother? All this nonsense people spew about how fighters beat each other up in training, so why can’t they fight in competition is garbage.  Most of the people making these claims have never been on a team of any kind and or have zero respect and loyalty.   If you think beating up or possibly injuring your good friend in front of millions to make an extra buck is the way it should be, then maybe you have the mental deficiency, not the fighter. #8.  Honest About Marijuana Consumption There are many reasons that Nick Diaz is still competing at high levels (no pun intended) and actually improving with every fight.   One reason is that he’s not a drug addict or alcoholic.  I’m not saying that he is where he is today because he smokes weed, I’m just saying that Marijuana is 100 times better for relieving pain and muscle aches over prescription pain killers.  Pain killers are a huge problem in the sport of MMA.  These pills are handed out like candy for injuries, and the next thing you know a high percentage of fighters are addicted and slowly destroy their minds, bodies, and sometimes families.  Of course, the world has some lazy potheads and Marijuana is addictive just like anything else that is abused, but Nick is far from lazy or dependent on the green sticky icky.  If more athletes smoked pot for relief instead of searching around town for the shady ass pill dealers, the world would be a better place. 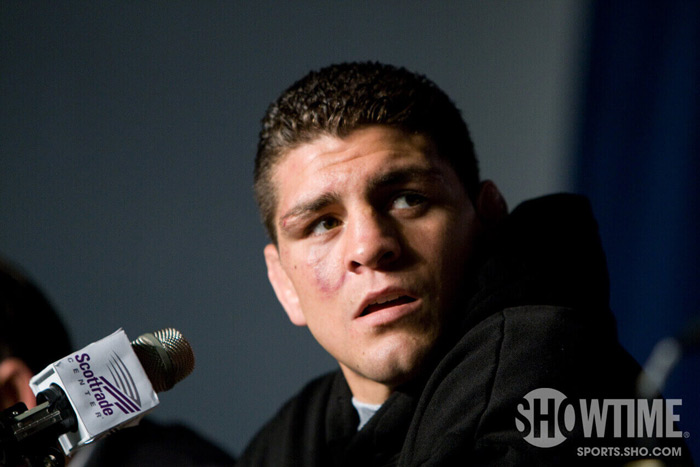 #7.   Interview Skills Some might call Nick Diaz a bit paranoid, socially awkward, uncomfortable, a rambler, a complainer, blah, blah, blah…I call him ENTERTAINING!  For a guy that rarely makes eye contact and seems to have a permanent frown, I sure as hell can’t turn off an interview with him!  He makes me laugh.  Nick is brutally honest about how he feels and has no problem with making the interviewer uncomfortable.  I think this partially has to do with the fact that Nick doesn’t understand the actual job of a journalist, but when Nick gives these priceless interviews, like he did recently with Ariel Helwani, he is actually doing the opposite of what he thinks…he’s getting himself more attention and views.  Or is this just a big trick on us?  Does Nick know exactly what he’s doing in interviews?  Is this his shtick?  Either way, please don’t slap Ariel Helwani for “instigating fights.”  I’ve been waiting for a long time for someone as professional and awesome as Ariel.   We don’t need him getting slapped and crossing over to another sport.

The mental games start for Nick Diaz long before the actual fight takes place, and it continues up until and sometimes after the submission or knockout occurs.  It’s very disheartening when a guy like Nick is holding his hands down, sticking out his chin and taunting you with, “Let’s go, bitch! Come on, bitch! Let’s fight, bitch!” when you’ve already hit him with your best shot.  And when you change your game plan, this is when Nick implements his.  Unless you’ve had years of fighting experience, keeping your composure in this situation is not easy.  How many guys have we watched Nick shut down mentally by making them brawl or falter from their gameplan?  He is the master of this.  Nick will literally hit the deck when he’s been hurt or dizzy from a strike and take time to recoup.  And since his jiu-jitsu is amazing, Nick will welcome his adversaries to jump in his guard and try to finish him.   This takes serious awareness to know that you’re hurt and instead of standing to take more punishment, Nick falls to the ground to clear the cobwebs.  Some might call his behavior and foul-mouthed taunting unsportsmanlike, but come on…this is fighting!  The guy gets emotional—rightfully so, the dude across from him is trying to knock him out and take his money!

Nick doesn’t call every opponent a bitch, just the ones who disrespect him or talk shit before the fight.  Let’s not forget the love and respect he showed to Sakurai after defeating him or picking Frank Shamrock up off the ground and telling him, “Get up ‘cause you’re a legend.”  It’s not like Nick is telling reporters he’s going to F them until they love him or biting off ears like some other world-renowned famous fighters.   Dana White and others have criticized Nick for being his own worst enemy and not being able to play the game.  So he might not have the skills to play the game of life how some see fit.  But I think he’s doing pretty damn well representing the only game he knows how to play and putting his hometown of Stockton (209) on the map.

#5.   Healthy Diet and Compassion for Nature This might not sound like it has much to do with MMA and fighting, but it does to me.  I think it shows a lot about what kind of person Nick really is that he won’t put garbage in his body or support the gross and cruel meat industry.  This shows he has compassion for animals and respect for his body.  Keeping healthy and in peak cardio condition is a year-long practice for the nickname-less, tattoo-less fighter.  Oh yeah, did I mention Nick doesn’t like when fighters paint their toe nails or have mohawks? Ha! Besides eating healthy, Nick also competes in Triathlons and loves mountain biking.  Although these hobbies are great for optimal fitness, it also shows that he is one with Mother Nature.

#4.   He Loves His Mom Years ago, I heard Nick say in an interview that he’d like to make enough money to buy his Mom a new house one day.  I might be a softy when it comes to stuff like this, but I would love nothing more than to see this dream come true for him.  And if he’s already achieved this, then that’s awesome.  He deserves it.  There’s no love like the love from a mother. #3.   Gomi Fight Had the pleasure of watching this fight live and I’m a Nick Diaz fan…enough said. #2.   Amazing Jiu-Jitsu Nick might not have wrestled in high school, but that doesn’t mean taking him down is a good idea.  He’s a wizard off his back and has one of the best ground games in the business.  If you haven’t seen his fight against Karo Parisyan back in 2004, watch it.  Nick was only 21 years old, and Karo was 22, but they put on one of the best displays of Jiu-jitsu and ground fighting that you will ever see.  The takedowns and transitions from one position to the next were a thing of beauty.  Way ahead of the time and at such a young age.  Nick is a black belt under Cesar Gracie and trains with some of the best practitioners on the planet.  He rolls with guys like Jake Shields…you think he’s scared of anyone on the ground that he fights?  Nick has finished opponents with a variety of submissions including triangles, arm bars, kimuras, rear naked chokes, and even a spectacular gogoplata.  If you enjoy all aspects of Mixed Martial Arts, and you’re a student of the game, then pay attention to how relaxed and composed Nick stays on the ground.  He flows like water, my friend, and never stops working. #1.   Boxing Nick Diaz has finished six of his last 10 fights with his superior boxing.  He is not given nearly the amount of credit he deserves in the sport for his outstanding offensive punching skills.  He has a great sense of distance and timing.  He stays right outside of range so he can easily counter using his long reach.  Not only that, but he is literally one of the few guys who have spent enough time hitting mitts and sparring in the gym to recognize the importance of body shots.  In almost all of Nick’s TKO wins, he has landed beautiful body shots to the liver and kidneys that have set up the finishing blows to the chin or temple.  How many guys have tried to stay on the outside and circle against Nick, but eventually he walks them down, pins them against the cage and treats them like a worn out Everlast punching bag!  Nick isn’t the fastest fighter in the sport, but he’s one of the few that can sit in the pocket and machine gun off some crisp punching combos.  His opponents don’t even know what’s going on half of the time because they’ve never been treated like this in the gym.  Top that off with the fact that he’s taunting you, and it’s not a fun night.  How many times have we heard, “Oh, this guy is gonna knock Diaz out in the first round!” And how many times does the complete opposite happen? Nick Diaz is one of the most well-rounded Mixed Martial Artists to ever live and will go down in history as one of the greatest of all time.  Mark my words.  In honor of Mr. Diaz, I will leave you with some words of wisdom: “Don’t be scared, Homie!”