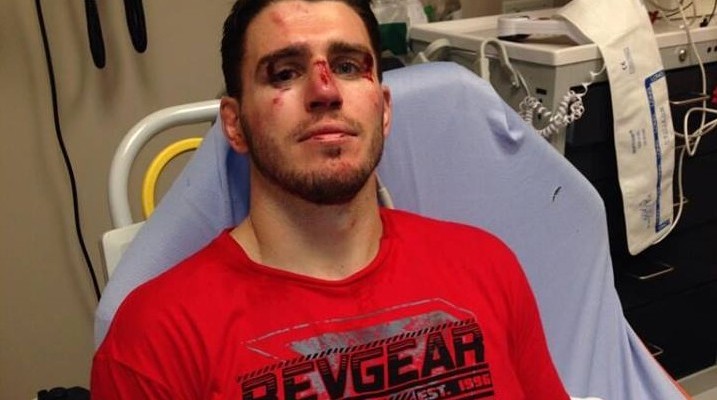 The dust has settled and my eye has cleared up a little so I wanted to put together a blog for you guys telling you about the fight and everything that lead up to it.

I want to start off by saying that I’ve always wanted to fight on one of the Military appreciation cards that the UFC does since the first one I saw. I was honored to be able to give them a night of entertainment and show my appreciation for what they do. The men and women in the military put their lives on the line everyday so people like you and I can pursue our dreams. They were one of the best crowds ever and really seemed to enjoy the show.  Once again, Thank You to the troops and the UFC for allowing me to be a part of the show.

That was my 10th UFC fight and to me, by far the best crowd I have ever fought in front of. Everyone was very respectful, excited and going crazy for the fights. It’s really satisfying to meet people that love what we do so much. They were just all around GREAT fans. Rafael Natal even said "I expected to get booed and hated but the crowd cheered loud for me and were patting me on the back on the way to the cage." It was amazing and this is one of the first times I could really hear the crowd during my fight.

Leading up to this fight I had been working on increasing my explosiveness and working on all aspects of my game.  My trainer Marc wanted me to be the aggressor.  At some point in the first round I lost my vision in my right eye.  Without the energy of the crowd I probably could not have continued.  These men and women can't just give up when they are at work, I knew there was no way I would either.

Lorenz Larkin is not an easy fight, even if your vision is 20/20.  He is fast and accurate and once he realized I was unable to see he began to pick me apart. By the third round the blood in my eyes had my vision completely distorted. At times he stayed in the pocket looking for the finish and also giving me an opportunity to find my shot. I was just never able to get mine off.

I don't blame my vision for the loss. I think the vision took a close fight and made it one sided. I needed to put more combinations together, focus less on finishing and have been more focused on doing damage and winning the rounds.  While the stats show I outstruck Larkin it was clear to see who landed the most damaging blows. I am not a point fighter, I come to do damage.  So I need to focus on making sure that my strikes are counting and doing damage.

I wouldn’t trade my most recent losses for anything.  While the sport of MMA is based on winning I continue to learn more in my losses then I do from my wins.  With a loss you have to deal with adversity and learn how to come through battles like these to become one of the best fighters in the world.  I will always go out on my shield and lead with my sword. 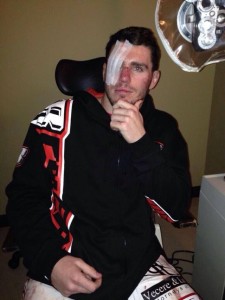 I do not know what is next.  I will fight anyone, anytime.  I am going to continue to learn and improve my skills. I’m sidelined for a bit while my eye heals.  The doctors said I will make a full recovery which is good.  The UFC/Zuffa really do an amazing job making sure we are taken care of after the fight. Not only was I rushed to the emergency room but the the UFC even arranged to have an eye specialist come see me in the emergency room, even after the ER doctor checked me out. They treat us like a parent would their kid and always make sure we are taken care off.

I want to thank my sponsors Revgear, Enseco Energy Services, HRM Resources, Vecere & Litte P.C., Boze Kennels, Alienware, Bony Acai, GovX, Virtustream, my management team at Ingrained Media, my training partners, everyone at my gym Factory X, my fans, the United States Military and everyone at the UFC.