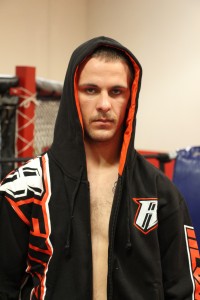 This week’s episode was another good one. It showed the struggles of actually being in the TUF house and away from family for a period of time. I used to watch and think, these guys are such girls, like why are they crying? This istheir dream and they're breaking down over six weeks?! Then I had to go through it haha and now it all makes sense.

I was obviously struggling emotionally and being in a house where you will be fighting the people you have been living with I tried holding back all emotion and any signs of weakness. I broke my big toe and painted it so the bruising wouldn't stand out just so nobody would know at first, that's how much I was concerned with not showing weakness. Similar to what Timmy did with his leg.

After being homesick for four weeks and not letting any emotion out or talking about it. Well we all know what happens when something overfills right? I broke down! I couldn't help it. It was Father's Day and I missed my wife and little baby girl. I could handle missing her but I know from previous experience that even a day of not coming home my daughter would sit at the door and cry for her dada. That teared me up inside and eventually led to the breakdown. Ronda made a nice gesture and brought all the fathers a really nice shaving kit to kind of help with the struggle.

The thing I really got upset over is that a week prior to Father's Day I asked if I could get one picture of my kid and wife for Father's Day and my coaches told me the producers had said no and there was no way possible. Then Ronda walks in with the shaving kits and inside each of her teams kits were picture of their families. At that point I wasn't even mad with my coaches I just had to find an empty room and let it out because I knew I'd be fighting in a few days and emotion in a fight leads to losses.

As far as the prank I honestly saw it as funny and something typically accepted in the TUF show. I didn't see any racial problems with it seeing as the picture was of a Russian lady. I did however have a problem with the fact that the Team Tate coaches ran out earlier than usual just so they couldn't be confronted about the pictures. I thought that was pretty lame. Anytime I've done a prank I'm there to see the reactions because that is the best part and the whole point but hey, maybe that's just me!

Down to fight business! The fight in many people’s eyes was not entertaining and didn't live up to any hype that was made. I disagree. I think it was a great fight and that if the Raquel vs Jessamyn fight hadn't aired the week before nobody would have been disappointed. After a war like that fight was you expect another, haha, first round josh was strong and implied his will easily. As the fight went on though Josh started to fade, he never quit or gave up but you could tell he was winded and couldn't keep the pace, at least that day he couldn't. Mike Wooten survived the storm and then brought one back of his own to steal the third round and win the decision! Great fight guys!

Next time it will be Sarah Moras vs Peggy Morgan and myself, Cody Bollinger vs my buddy Anthony Gutierrez. Tune in for a great show and amazing fights!