We continue our series of articles about Women in Martial Arts by Katalin Rodriguez Ogren. Read Part 1 and Part 2.

The Mixed Martial Arts community is no more unified on their thoughts about women in the sport, as the mainstream athletic community is on their overall views of mixed martial arts and full contact fighting .

This sentiment however does not seem to concern women who have devoted their career to the combat sports.  “I do not expect men to embrace women in MMA right away, there has always been apprehension in accepting women in any of the male dominated sports,”  expresses Erin Webb, the News Editor of Fightergirls.com and kickboxer. 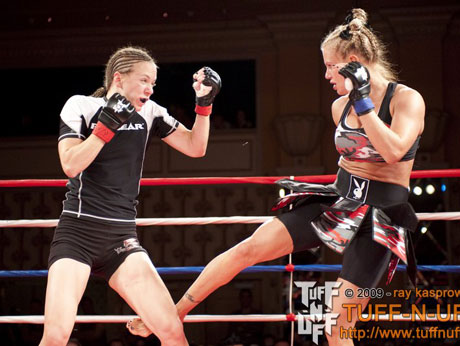 Even Lightweight MMA fighter Jeff Curran (32-13-1) and co-owner  of the X-treme Fighting Championship (XFO) admits that he doesn’t enjoy seeing a woman’s face get bloodied, “but fighting isn’t good for anyone to do… But I don’t like to see any pretty face bleeding.   I am pretty myself and I do not want my face to bleed either.”  Although Curran gives a valid, yet witty point of view on this topic, he believes that, “ women fight their butt off… I do love watching it the same as other fights.  I love Carano, LaRosa and Howe.  I have even had a woman’s bouts on my card, it was great! … I would have more, but there are not enough women’s bouts to go around and I am a smaller show.  I welcome more women’s bouts on the XFO shows… Women should have a place in MMA.” END_OF_DOCUMENT_TOKEN_TO_BE_REPLACED