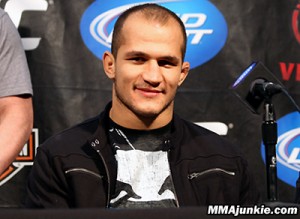 March 21, 2010, UFC Live Vera vs. Jones: “I threw my punch when he kicked me, and that’s it,” Bad Boy fighter Junior "Cigano" Dos Santos said following his fight with Gabriel Gonzaga.  Dos Santos defeated Gonzaga by TKO (punches) at 3:53 of the first round. Dos Santos also received one of three “Knockout of the night” awards. This is his fifth straight win in UFC. Photo: MMAJunkie