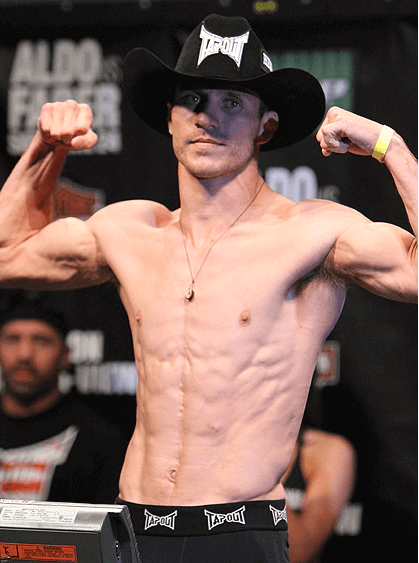 Cerrone looking to make it two-straight in the UFC.

Much has been made of the success and faltering of many a WEC fighter entering the UFC. Some have come in with a roar, and some with a whimper. One that has stomped into the Octagon has been Donald “Cowboy” Cerrone (14-3-0-1). The former WEC contender opened up the UFC phase of his fight career with an emphatic submission victory over Paul Kelly at UFC 126 in February. He was next scheduled to face off with Mac Danzig in what had quickly become a blood feud. Unfortunately, Danzig suffered an injury, and had to pull out of the fight.

Stepping in to take Danzig’s place will be BJJ ace Vagner Rocha (6-1). Does the change mean anything to the “Cowboy?” Does he want to face Danzig in the future? Here’s what he had to say:

“Right now, I’m just taking it fight by fight. There are so many top fights out there right now that I’m content with fighting the next guy the UFC wants me to fight.”

Cerrone is being proudly sponsored by one of the top gear manufacturers in all of MMA, Revgear. The “Cowboy” understands the importance of sponsors in MMA, and is grateful to the company for supporting him:

“Revgear makes my job as a fighter much easier. Their products are top-notch, and to be able to train with a product that holds up under our training regimen is huge! I would recommend Revgear for anyone serious about their training.”

Taking it a step further, Cerrone put sponsorships in general in perspective:

“Sponsorships in MMA are how we as fighters are able to make a living. Sponsors like Revgear allow us to train full-time, which in this sport is the only way to be a champion!”