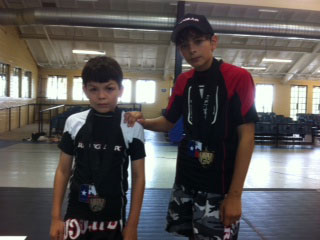 Brandon & Joe Garza both competed in the No Gi BJJ Texas Subleague tournament in San Antonio in June. Brandon took gold in his division (90 to 99 lbs) winning all 4 of his matches by submission and silver in a new catch-weight type of division that they started in which anyone can enter who is 11 to 13 years old. Brandon won three out of his four matches so he pulled off seven wins and one loss - all in one day! Joe (9) took four wins four draws and two losses and ended up with two silver medals.