I was really hoping the Steven Seagal deadly, secret, front kick hype would leave us quicker than Joe Son had realized that wearing a cup might have been a wise idea, but the talk on forums and media outlets is still lingering. Is this good or bad for the sport of MMA? Are the same idiots over the years who say, “Who would win in a fight between Jean Claude Van Damme and Steven Seagal?—or better yet—Steven Seagal versus those Gracie Fellers?” now saying to their friends “I told you man, Seagal’s a badass! He taught Anderson Silva that front snap kick that I learned in Tae Kwon Do class at the age of seven, but Seagal showed him how to do it right!” Are the masters of the karate and the no touch knockout world actually too tough to enter the cage for insurance purposes? Does the UFC really want the fans witnessing death? Is Silva actually falling for Seagal’s brainwashing wrist-twisting and kicking no higher than three feet against a wall tricks? Or are Silva and Team Black House punking us all? At this point, I honestly don’t know. 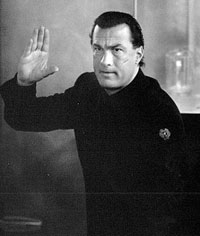 My initial reaction to seeing Seagal take the modern day gladiator walk alongside Silva to the Octagon was that they must be big fans of each other’s work. But I was thinking more along the lines of Silva doing impressions of Seagal while watching horrible over-dubbings of Above the Law in Portuguese, and Seagal actually admitting to his students, “Now this Spider guy would whoop my ass!” In reality though, the majority of teachers and coaches I’ve met like Seagal do not have proper brain function that enables them to recognize reality. They are so wrapped up in surrounding themselves with followers and weak-minded individuals that they eventually believe their own hype. Can traditional martial arts work in some combat situations? Absolutely. Before I dove into the more combative arts of boxing, Thai boxing, and Brazilian jiu-jitsu, I studied bits and pieces of almost every traditional art. I studied Isshin-ryu karate, Tae Kwon Do, Aikido, Hakko-ryu Jiu-jitsu, Ninjutsu, and a few other systems that fat guys with eighth degree black belts created for themselves. Did I use these arts in the streets or confrontational situations and win? Yes I did. Were most the guys I beat up drunk or clueless when it came to fighting? Looking back, most likely. The fundamental movements and throws you use in Aikido can be useful against the Average Joe in combat. No matter what, you still learn valuable movements and get the general sense of angles, footwork, and body awareness. Did I get my ass handed to me when I sparred a pro level kickboxer for the first time that had a wrestling background? You’re damn right, I did. But instead of being the master in my own art, I decided to accept the fact that the majority of techniques I had learned over my life needed to be thrown in the garbage. I had to relearn almost everything in order to hold my own with professionals on the mixed martial arts circuit. Steven Seagal will not face this reality. He can’t let go of his ego and accept the fact that combative martial arts have evolved and catching a punch coming at you in slow motion and applying a Kotegaeshi isn’t really that easy or practical. In a martial art like Aikido, the Uke (person receiving throw) is doing most of the work and without a partner who knows how to take big falls, this particular style would be less appealing. So after receiving a letter from Silva saying, “Will you please teach me your deadly stuff?” Seagal decided to veer away from his Aikido roots and teach one of the first kicks you learn in most martial arts. Oh wait a minute, when Seagal was asked if he had ever seen this kicked performed in a mixed martial arts setting, he said, “Well nobody knows the kick… I’m teaching it to Machida and Anderson and a few of the Brazilians.” What the hell? What was that kick I learned when I was six years old? And was my mind playing tricks on me when I saw Silva throw it in at least five prior fights of his? Oh the confusion! In closing, I’m not completely sure how I feel about this debacle. In some ways, I find it very comical to watch someone like Seagal spew nonsense from his mouth. In other ways, I’ve worked too hard promoting the sport and educating my peers on its evolution and therefore, I’m insulted when the best pound for pound fighter in the world takes part in this sort of jargon and says Seagal taught him how to throw this kick. Is this all just master marketing on Silva’s part? Is he being paid by Seagal? Is everyone being punked including Master Shihan Seagal? Does this just bring more attention to the sport I love? What was Seagal learning while in a coma for five years during Hard to Kill? Maybe this is where he learned how to properly curl his toes for the deadly front kick. Either way, I’m contributing to this bullshit by writing this article. I assumed it would die down rather quickly, but like the great Reggie Warren Jr says, “Don’t make assumptions"!
×