Revgear fighter Dominic Batara, 7, went 4-0 winning all of his matches in the Gi and No-Gi submitting all of his opponents.  His relentless game plan never put him in any danger as he worked his technique from top, north south and back mount positions throughout all of his fights.  Along with his wins, the highlight of the day was Dominic not giving up any points during any four matches, a true reward for all the hard work and time he has put in at his gyms - Fisticuffs, Purebred, Universal BJJ and USA Wrestling. 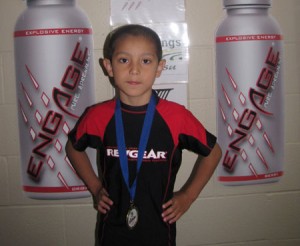 Photo: On July 17th Dominic took part in Revolution BJJ and Submission Wrestling Tournament in Bonney Lake, WA. He placed first in Gi and No-Gi Divisions (49 lbs and Under)
×